Before starting let’s get acknowledged about AngularJS!

AngularJS allows us to work out every nice single page applications easily, particularly when we become well-versed with all the concepts. If we need to execute a single page application, it’s can be bit much to set up the important config, routing, components, services and more than makes up an Angular app.

Most of us look for something simple and easy to use.

For something lightweight, the Best Solution is Vue.js!!!

Vue is easy to use a format which can be really easy and smooth to work on. Vue.js is a JavaScript framework, which is versatile, approachable and easy to use. For Vue.js development, you are only required to have a basic knowledge of HTML, CSS, and JavaScript.

It is a progressive framework for building user interfaces. It’s library is focused on the view layers and is very easy to understand and integrate with other libraries or existing applications. In order to explain you in a better manner let me make you aware with some of the highlights of Vue:

The Vue.js library is very small in size and ensures that your project greduces to minimal with its use and your website loading gets a fast pace.

How To Install Vue.js?

To use CDN, no need to install NPM.

There are different ways to include Vue.js:

For thhis, create a HTML file. Let us suppose file name is myFirstApp.html.

Now in html file use below code for simple demonstration of Vue.js. 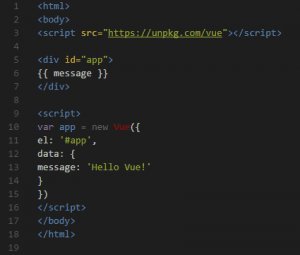 The output of this file show “Hello Vue!” in browser. In this example, Vue.js render data to the DOM using straightforward template syntax.

NPM is the beneficial installation method for large-scale Vue applications

After install nodejs, steps for installation process of Vue.js are as follows:

To install Vue globally first, we need to install Vue-cli.
$ npm install -g vue-cli
Make sure that Node.js and the npm command is available on your system.

We’re telling Vue to initiate a new project and use the webpack template.
We can give the project name firstapp and execute the commands on the command line in the accompanying screenshot:

The project is created in the folder firstapp. Change into that registry with the accompanying command:
$ cd firstapp

Subsequent to finishing the establishment of hub bundles you can begin the server being developed mode by utilizing the accompanying command:
$ npm run dev

This will start the server on port 8080 and the application output will display in the browser automatically: 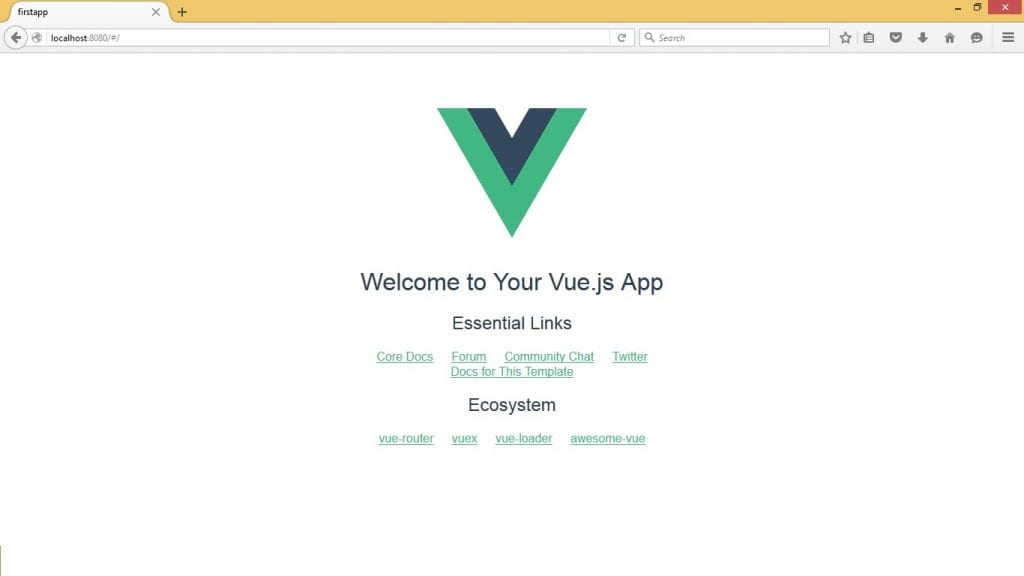 On the off chance that you need to work for production, you can run the accompanying order:
$ npm run build

Let’s take a look at the vuejs initial project structure which is available in folder: 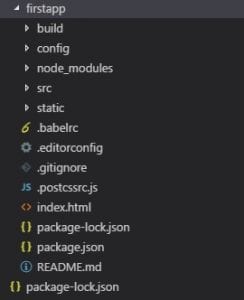 In the project root folder, you can find files and folders. We should analyze the most vital ones.

This index.html file is the starting point of Vue.js application and within the body element is available which has the id property set to string app. This component is utilized for the yield which is created by Vue.js.

Next, take a look at file main.js in the src folder. This file is used to Vue application initialization:

On top of file you can find three import statements

import Vue from ‘vue’: Vue is the main class of Vue.js framework

import App from ‘./App’ : App is the root component

import router from ‘./router’ : To map components to the routes

The new keyword created a new instance of the main framework. The constructor takes a question as a parameter which contains accompanying three properties: 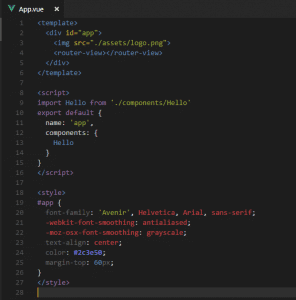 As in each Vue.js single-document segment, the App usage is part up into accompanying three sections:

The content segment is influencing a default to a fare of a protest declaring the segment named app. This subcomponent is utilized as a part of the layout code of an application and actualized in document hello.vue in folder components.

The execution of part Hello resembles the accompanying: 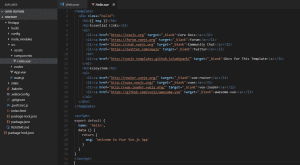 The segment setup question is traded as default. The part design question now established, contains an information strategy. This technique restores a question which speaks to the part’s model. Properties characterized in the model question can be utilized as a part of the segment’s layout by utilizing the addition sentence structure.

In the case of over the model, a protest has just a single property: msg. The string which is allocated to this property is incorporated into the segment’s layout by utilizing:
<h1>{{ msg }}</h1>

The v-for directive makes it possible to render an element multiple times based on data. One can utilize this order for emphasizing over an array and the cluster information to the output. To start with adding an array to the object which is returned by the information technique:

At that point utilize the v-for mandate to incorporate a rundown in the yield printing out the firstname and lastname estimation of each array element:

The v-model directive makes a two-route authoritative on an information component or a segment. Make a point to characterize a property in your data object which ought to be utilized as the coupling target:

Now, use the directive to bind a value of an input element to that property

With that binding setup we’re getting two impacts:

The complete code of the adjusted Hello component execution should now resemble the accompanying: 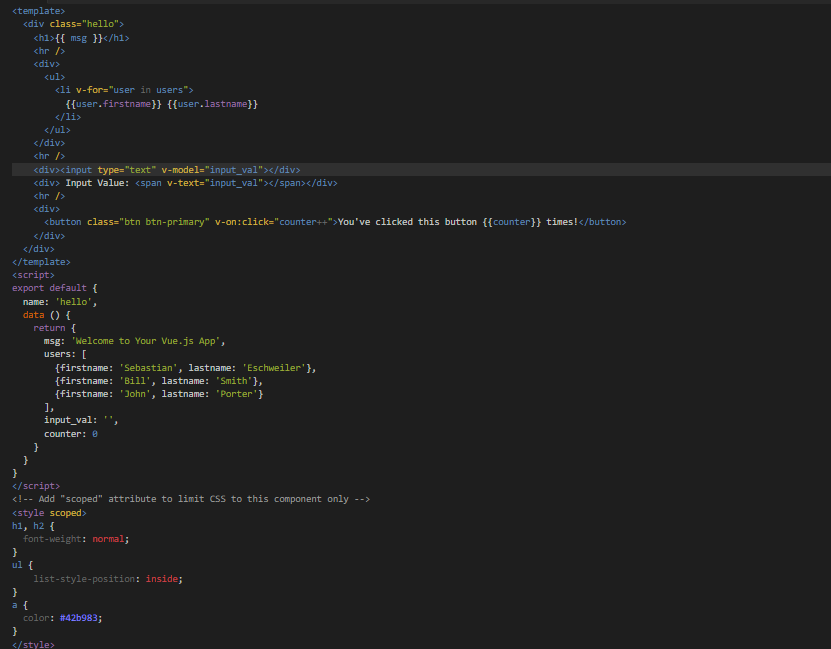 The outcome can be found in the accompanying screenshot:

Isn’t it easy? Just follow the simple steps and you are done!

3 thoughts on “How To Install Vue.js With Basic App Development?”

Leave a Reply to B Uma Sankar Cancel reply