Netflix is an online media service provider that gives a platform to watch all famous TV Shows, Awards, Documentaries, Flims, and much more entertainment on a broad level. Netflix as a big brand is improving itself very fast these days because of its attracting features and entertainment media. It also provides one month free trial for every new user. But after one month you will be charged as per the plan.

Netflix contains big database compared to other media service providers like Amazon prime video, HBO, and Hulu. It is a big name in the world of the online entertainment industry. It was founded by Reed Hastings and Marc Randolph. Netflix is used worldwide and even you can download any media which you like in it. Now, if we talk its data processing work then Netflix is very fast and robust in processing the data online.

Two major ways of processing the data in Netflix

How data is Processed using Chukwa/Kafka in Netflix?

Netflix is a big data-driven organization and many products and business decisions are totally based on data analysis. In this article, you will understand the evolution pipeline of Netflix. The pipeline is mainly used to collect aggregate data and move that data on a cloud scale. Once you click on any media service Netflix starts processing data in less than of a nanosecond. Every time you watch new application or shows it process the data in several terms. Netflix provides almost 500 events that consume 1.3 PB/day and 8 million event that consumes 24 GB/Second during peak time.

Over the past few years, its data pipeline has taken experienced on major data transformations due to technological developments and evolving requirements as follows

In the last couple of years with Elasticsearch and Kafka, it has been a growing emerging demand for real-time data analytics in Netflix architecture. Kafka contains its real name as Apache Kafka. It is a totally open source and stream processing platform. It is written in Java and Scala. Apache Kafka is used to handling the real-time data. Elasticsearch is an open source engine that is based on Lucene. It creates a full text and distributed search engine through HTTP web request.

As a result, to upload online events to EMR/S3, Chukwa can also provide traffic to Kafka (it is the main gate in real-time data processing). In V1.5, around 35% of the live stream events are posted to the real-time of the data pipeline. The centerpiece of the real-time pipeline is the main router. It is much responsible for channelizing the data by using Kafka to the links like as secondary Kafka or Elasticsearch. 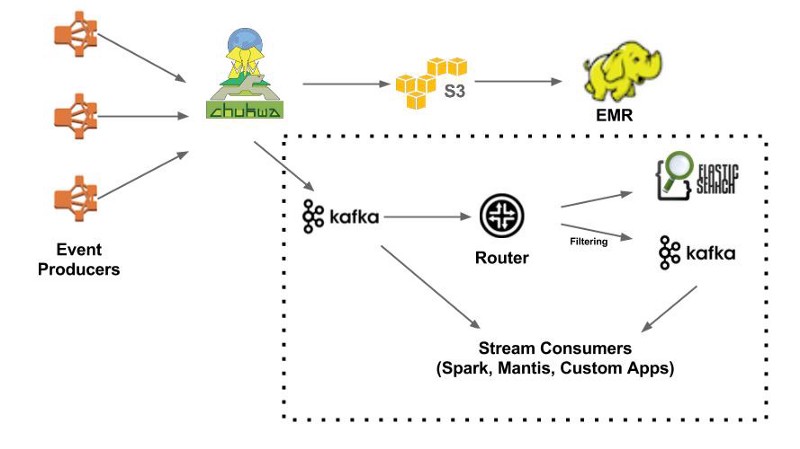 Once we deliver final data to Control panel (Kafka), it empowers users to get experience with stream processing like a Spark, Mantis, Custom Application, and Spark. “Responsibility and Freedom” is the DNA of Netflix’s future. It totally depends on the users to select the right path for the task. Because our expertise is our moving data at a large scale, and our data management squad maintains the router just like managed service.

Facts while operating the routing for data service

So far, we have seen a lot of issues related to routing service, but there are different motivations for all of us to regenerate our data pipeline. For this reason, you need to simplify the Kafka architecture. Kafka provides replication that improves its reliability and durability. On another hand, Chukwa does not support replication. Kafka has a solid vibrant community with strong communication.

There are three main components as follows:

First: use only Netflix Java library and directly write to Kafka.

Kafka stores temporary data which can be moved from one place to a different place. Buffered data also can be used while moving process and data within a computer. It also helps to consume temporary search from downstream links.

The data routing is a service that is responsible for moving data in the control panel which consists of fronting Kafka and router to many links like as S3, secondary Kafka, and Elasticsearch.

For now, you have seen how Netflix used data and how steps have taken for data processing. If we compare the process of data processing with Amazon and HBO, Netflix won because it covers a very vast and robust process for processing the data in Netflix. Now, we will see look into how it works in real life. Netflix beats Amazon and many other media services because of its simplicity and easiness.

How data is Processed using Big Data Analytics in Netflix?

Netflix is a website that allows users to watch online streaming like as “Entertainment and Original TV Shows”. Netflix has over 1 Billion subscribers till now and growing very fast as compared to other streaming channels like Amazon Prime and Hulu etc. Now, learn how Netflix uses big data analytics to drive the success. Netflix uses millions of data everywhere in the world. When they launched streaming media service in 2007, that took 7 years to collect the data to predict the success of their first real production ‘House of Cards’. Netflix has come across the world and used data analytics on the right path to get success in business point of view.

As you know, Netflix has over 100 million user base, imagine that how a large volume of data it receives on a daily basis. Netflix has made some events that collect the data in terms of big data analytics. Netflix has a solid team of data scientists which they track records like this as follows.

The first series ‘House of Cards’

Netflix provides original media shows like as House of cards. House of cards is a famous and very popular American TV web series, it started first web series in February 1993 with 5 seasons till 2017. HOC is totally based on thriller political drama. HOC divides into two big names Kevin Spacey Films and David Fincher Films. Most of the viewer watched Fincher’s film name ‘The Social Network’ from start to the end. 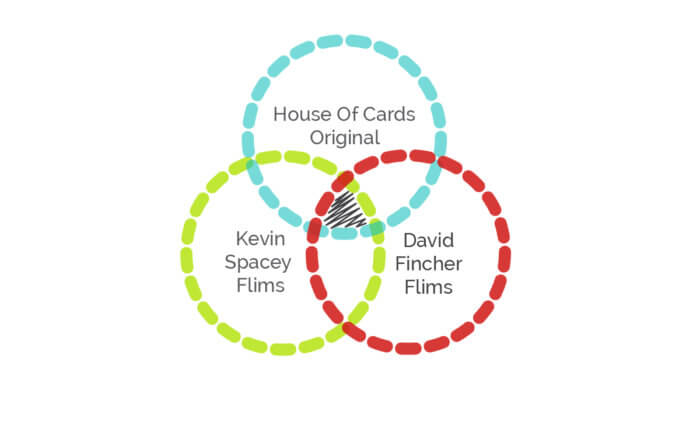 House of cards was divided into two watching patterns for measuring the intersection result. It was easily predicted that this plan would be the super hit. Now, we all know they were right but not only for content creation, they also used big data analytics to enlighten the market show. In conclusion, they have created sections of user experience and made some different films trailers to achieve these sections. Netflix collect all the data of individual sections like as follows

The image given below shows the data analytics framework at Netflix. 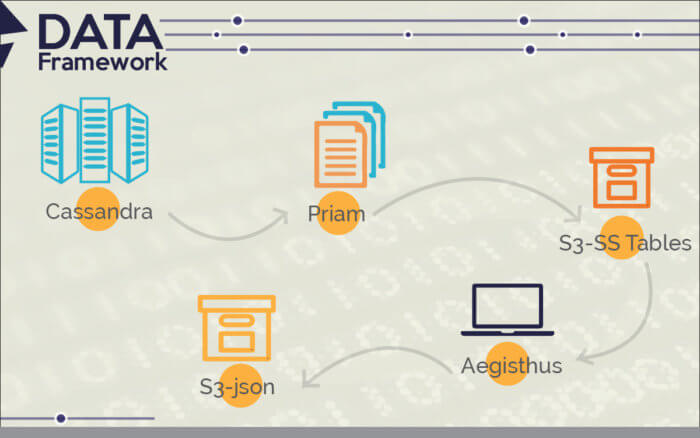 Aegisthus is a place that built Netflix’s data structure which later can be used to work on Hadoop MapReduce in terms to divert from Cassandra’s SSTables to query-able methods.

Analytics has given a top edge as with its all competitors. Surprisingly, Netflix is the only content creation organization who uses analytics and data at this level of scale and content production acquisition. Other competitors use data analytics for only content promotion. Netflix uses data to identifying success rate of a particular show. It really does not need any pilot episodes. Pilot episodes are just sample or temporary episodes for new concept programs. Netflix’s original TV shows success rate is increasing around 80% as compared to other traditional shows around 30%-40%. Netflix also uses big data on advertisement and suggested TV shows to premium users that really helped in its promotional budgets.

Netflix and its competitors 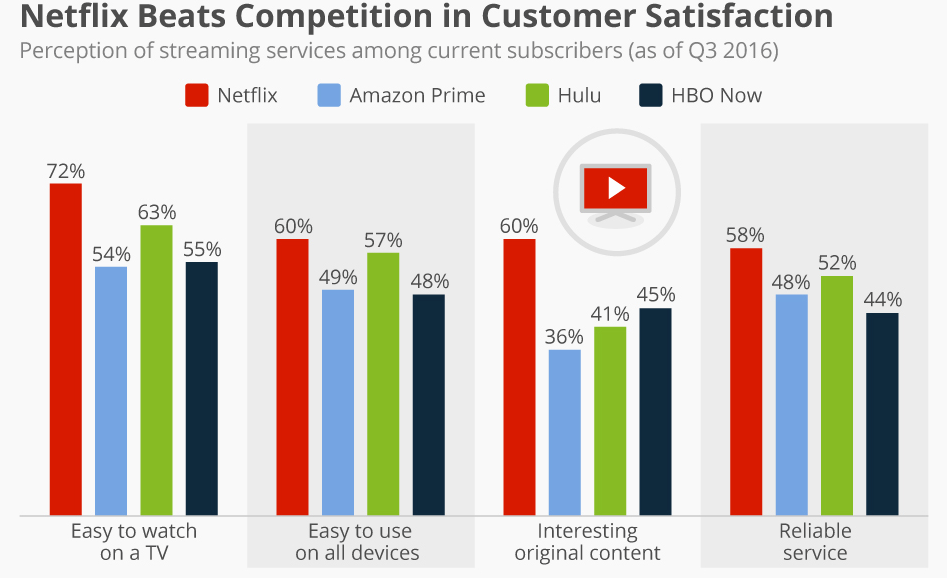 I hope you would love this information about Netflix infrastructure. In the 21st century, it has become a big brand for its creative feature, highly accessible data, and smooth look. Netflix has a solid production house and if you don’t have so much good production, none of the predictive analytics can save a TV show or series etc. In conclusion, every analysis does not give you the good result. Practically, analytics can not predict the success rate. But, it always helps in making the informed business decisions.