As you already know that when we execute our test cases, we usually decide the status of execution pass or fail on the basis of comparison of expected and actual outcome.

Now, the question arises in everybody’s mind is that what is Assertion and how to use it. Let’s start the discussion about it. 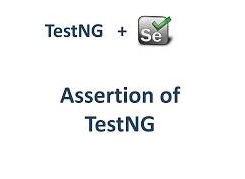 The assertion is a feature in TestNG which is used to fail the test scripts whenever the expected result is not matching with the actual result.

We can easily verify the test result pass or fail with the assertion. Assertion plays a major role in identifying the issues in the application. We can consider a test script successful only if it doesn’t throw an exception.

The assertion is of two types.

Assert will fail the script when expected result is not matched with the actual result. We use assert for basic and the critical features.

Assert is the default mechanism in TestNg, it is present inside org.testng package. We use it when we want to stop the execution immediately when a script fails.

Hard Assert will throw an Assert Exception immediately when an assert statement fails.

All the methods present inside Assert class are static. The methods which we use commonly are mentioned below.

This method takes two arguments of String type and checks whether both are equal or not. It will fail the script if the arguments are not matching.

It will take three arguments of String type and checks whether both the results are equal or not. If the results are not equal then it will fail the script and throw the message which you provide.

It will take two boolean arguments and verifies that both are matching or not. It will fail the script if the arguments are not matching.

The functioning of this method is completely opposite to assertEquals method. It will fail the script when both the argument matches. This method will throw the message which you provide.

This method takes one argument of boolean type and checks whether it is true or not. This method will fail the script and throw assertion error if it is not true.

This method will take two arguments one is a boolean type and another is String type and verifies that the condition is false or not. If the condition is not false then it will throw the error message which is provided in the argument.

It will take an object as an argument and verifies if it is null or not. If it is notNull it will throw an Assertion error.

This method is just opposite to assertNotNull(object), it will verify that the object should not be null. If it is null then it will throw an Assertion error.

Below is a sample code that how can you use these methods:

This method is used to fail the test script when the assert condition doesn’t match.

Below is the example that how can you use this method:

Above mentioned scenario is when your test script fails, here assertAll() will immediately stop the execution of this test case.

Execute the above script and you got to know that how assertAll() will fail the script and stops the execution.

This is all about Assertions in TestNG, you have to use it in order to verify your test results. Without verifying the results you cannot ensure that you have successfully executed your test scripts. It will also help you to analyze the test results when your script fails.