First of all, I would like to give the brief description about WinRunner. It is a powerful automated testing tool developed by Mercury Interactive Company since it is basically used for functional regression testing. Also, It automates the testing process. Hence, to ensure that the applications performing as we expected or Not. It records operations as you perform them manually in your applications build and generates a test with required observation as checkpoints. In addition, you can run your test on application build and analyze the result manually with respect to the corresponding manual test case. Then, WinRunner enables you to adapt and reuse your tests for regression and protecting your effort in test creation.

We are going to discuss various techniques and modes to record (like context sensitive and analog) a test case using win runner. So, we will understand how one can use WinRunner effectively to make the testing job easy.

To open WinRunner tool on the desktop, proceed this way:

First of all, you need to follow these steps as follows, 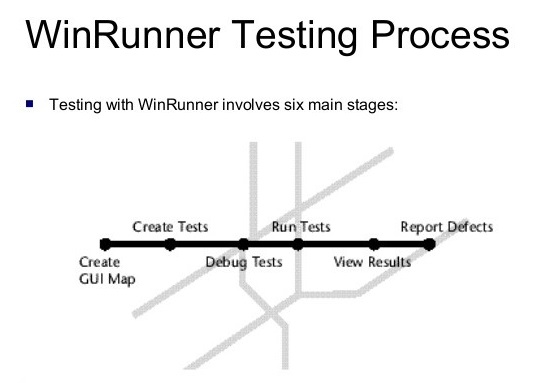 Finally, every automated test script program consists of navigational statements to operate build and checkpoints. To conduct required functional observation with respect to the corresponding manual functional test case. So, the scripting language tests script language for automating a manual test case. Because it is mercury interactive C-like Test scripting language. Therefore you create a test script by recording or programming TSL statements.

First of all, you need an Add-in manager window, as shown in the figure. After that, list out all WinRunner supported technologies with respect to purchased Add-in licenses. So, this window will open while launching WinRunner on our desktop.

After selecting Add-in technologies in Add-in Manager, The tester should continue loading WinRunner, therefore it returns a welcome screen.

A. Record Button: Basically this button is used to start recording of manual operations on our application build. Hence it is an initial point to create an automation test script.

B. Verify button: It specifies run mode to run the automation test script on the application build.

C. FromTop_button: It is used to run the automation program from the first statements.

D. FromArrow_Button: This button is basically used to run the Automated programs from selective statements.

Basically, It allows you to record the manual operations in two types of modes namely Context Sensitive mode and analog mode.

Furthermore, If you start recording in context-sensitive mode, Then WinRunner displays the following script as shown here for manual operation.

In this mode, The WinRunner records mouse pointer movements on the desktop. Especially analog Recording Option Records Keyboard input, mouse click, and the precise x- and y- coordinates traveled by the mouse pointer across the screen. To select analog mode, follow any one of the navigation paths 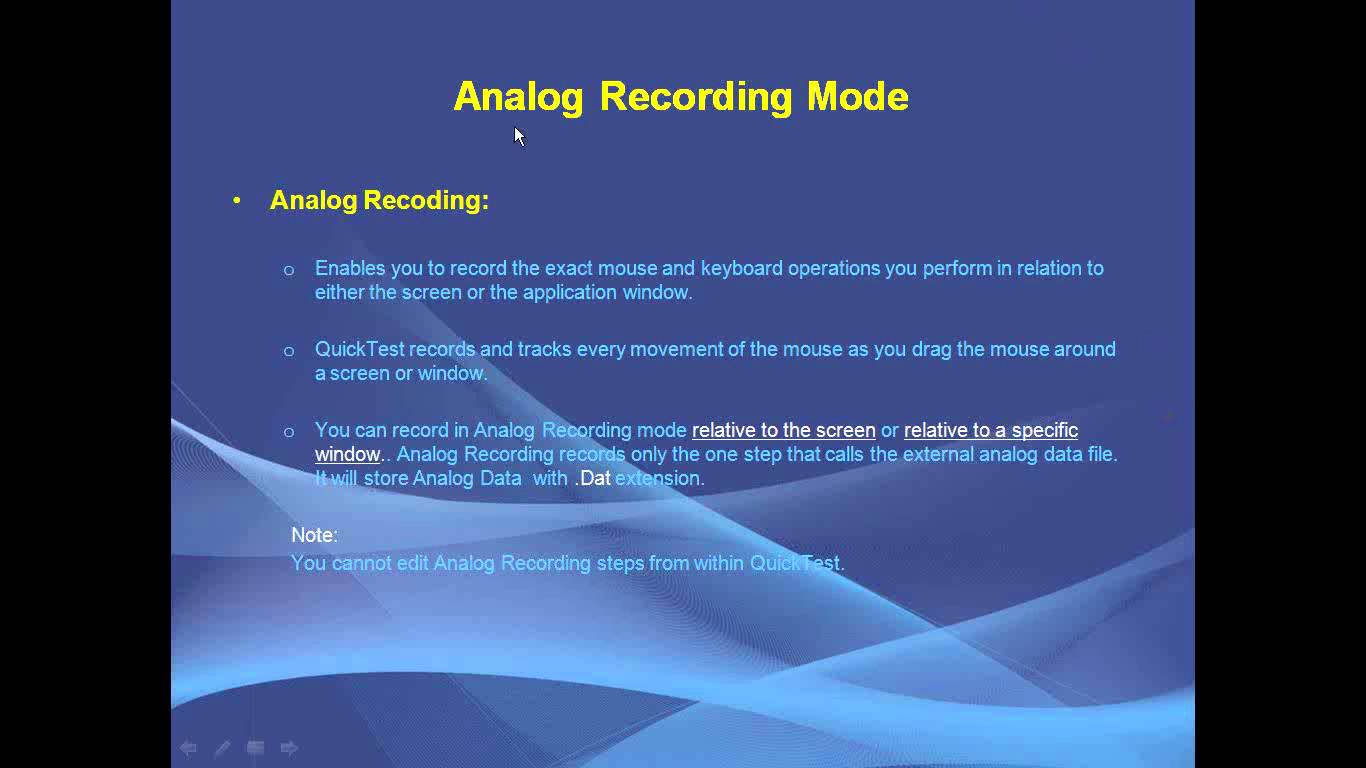 If all required actions or operations are recorded, you can go to stop recording using any of the following options.

-CTRL+F3 as the short key

There are various run modes, which are as follows, However, some of which are described in the following table:

Description-> At the time of running in an update run mode WinRunner takes default values same as expected values of checkpoint in your automation test script. 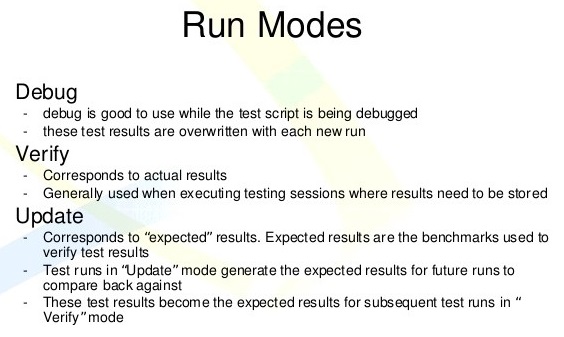 Generally, the test script you create with is written in text script language(TSL). TSL is a C-Like programming language which is specially designed for testing. Hence, It is a high-level language and easy to use because it provides all the concepts of conventional programming languages with functions to improve test efficiency using WinRunner. Therefore, This enables you to modify record test script or to write sophisticated test scripts. However, there are four types of TSL Functions. Each type of function addresses a different requirement.

These functions perform operations on GUI objects, some of them are:

These Functions Perform basic programming language operations, such as basic input and output, control flow, mathematical, and most of all, array functions.

These functions configure the testing tool according to your requirements, like much as add functions to the generator functions, So we create custom GUI Checkpoints.

Basically, checkpoints define a verification or condition on a testable functionality of software build. So, It is a functional testing tool and it provides facilities to automate the following coverage of an application.

To Automate these coverages, WinRunner provides various type of checkpoints.

-for the single property; 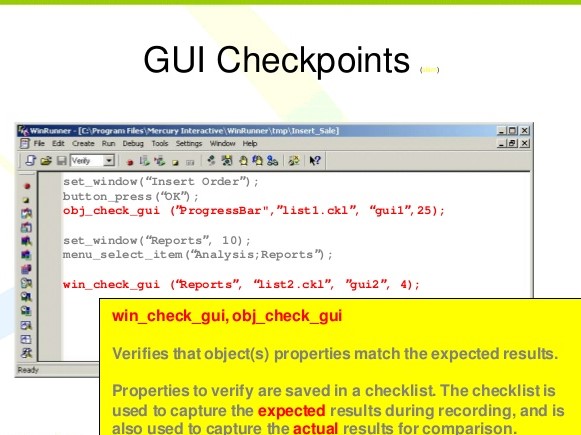 Case study: Mapping between some object type and testable properties shown in the following table.

A bitmap is the binary representation of an image. Therefore, we can use this checkpoint to compare images in versions of our build application. Since, this checkpoint only supports static image due to the images with dynamism, for Example-

First of all, we should know that- to Automate backend testing, test Engineer generally use this checkpoint in WinRunner. Hence, at the time of backend testing, test engineer validates the impact of front-end operations of backend tables in terms of data validation and data integrity. While Data validation means correctness of inserting new values into a database table. Data integrity means correctness of changes in existing values.

These days every application demands its own database for storing various information. At the time of testing the application, the database of that application should also be tested to ensure that the values entered into the database are correct. While, in WinRunner, For Checking databases, we have a feature called database checkpoint. Since Database CheckPoint consists of three sub-options.

Last but not the least, automated testing with WinRunner addresses these problems by dramatically speeding up the testing process. Finally, you can create test scripts that check all aspects of your application, and then run these tests on each new build. So it simulates a human user by moving the mouse cursor over the application, clicking Graphical User Interface (GUI) objects, and entering keyboard input—but WinRunner does this faster than any human user.