As per today’s scenario, companies not only desire to test software adequately, but they also want to get the work done as quickly and thoroughly as possible. To accomplish this goal, organizations are turning their head towards Automated Testing.

Automated testing is guided by a web of techniques and technologies, but do you know what is the best of them all? Well, the answer to is Selenium WebDriver!

The four major components of Selenium are:

The Selenium IDE is nothing but a Mozilla Firefox add-on that allows recording, editing, and debugging tests. It was previously known as Selenium Recorder.

Selenium Remote Control (RC) is a server that accepts commands for the browser via HTTP. It solves the limitation of Selenium IDE and supports various programming languages.

Using Selenium IDE, we can record and run the script but only in the Firefox browser. However, using Selenium RC, we can run the same recorded script in any browser. To do this, we have to start and stop the server to execute the test scripts.

In Selenium Grid, the hub is a computer which is the central point where we can load our tests. The Hub also acts as a server because of which it acts as a central point to control the network of Test machines. A node can be referred to as a test machine which opts to connect with the hub.

What Is Selenium WebDriver?

Selenium WebDriver is one of the most powerful and popular tools of the Selenium toolkit. Unlike Selenium IDE, WebDriver allows you to execute your tests against different browsers.

It is an extended version of Selenium RC. It aims to provide a friendly API that is easy to explore and understand, easier to use than the Selenium-RC API, which helps to make your test scripts easier to read and maintain.

Basically, they are used to remove the server part from the WebDriver so that the performance does not emerge as an issue in the WebDriver. It simply means to write your code and it will directly communicate with the browsers.

The Architecture Of Selenium WebDriver 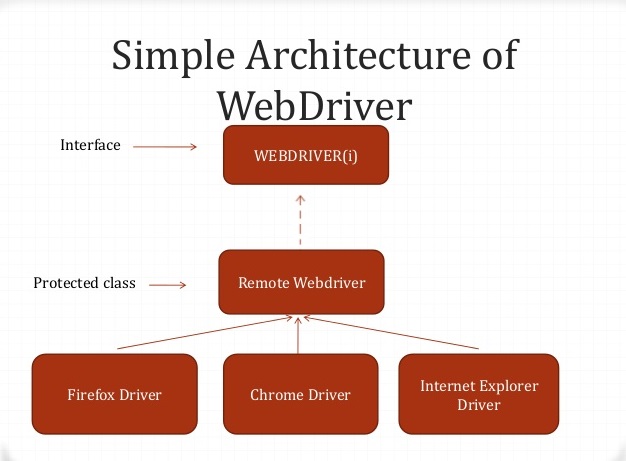 FirefoxDriver is a term of class that has been written or designed specifically for the Firefox browser. It includes the use of methods that are implemented and can be further instanced. It can perform all the methods on the Firefox browser as defined in the interface WebDriver.

The WebDriver as an Interface

WebDriver is an interface provided by Selenium WebDriver. As we know, interfaces in Java are the collection of constants and abstract methods (methods without any implementation). The WebDriver interface serves as a contract that each browser-specific implementation like ChromeDriver, FireFoxDriver must follow.

This term can be defined as a bunch of languages that are developing a framework, interacting with the Selenium WebDriver, and working on various browsers and other devices.

This API is a medium of communication with programming languages and browsers.

Browser drivers help in communication with the browser. Drivers receive commands directly from the Server and perform actions on different browsers as per different commands using the remote WebDriver.

We have so many browsers like Mozilla Firefox Browser, Chrome Browser, Opera Browser, and IE Browser. Each browser will contain a separate driver, and each driver knows how to drive the browser that it corresponds to.

For example, the Chrome driver knows how to handle the details of the Chrome browser and drive it to do things like clicking the button, going into pages, getting data from the browser itself. The same thing happens for Firefox, IE, and so on.

Pros & Cons Of the Selenium WebDriver

Everything is loaded with some pros and cons, so let’s dig into the advantages and disadvantages associated with the same…

Advantages of the Selenium WebDriver

1. Selenium is an open-source, freeware, and portable tool.

5. WebDriver is faster, as compared to RC.

6. Unlike RC, you don’t have to start a server in WebDriver.

7. You can simulate the movement of a mouse using Selenium.

9. You can find the coordinates of any object easily using WebDriver.

10. Integration with the testing framework like JUnit or TestNG is very easy with the WebDriver.

Disadvantages of the Selenium WebDriver

1. Selenium does not provide any built-in IDE for script generation and it needs other IDEs like Eclipse for writing scripts;

2. Selenium users lacks online support for the problems they face because there is no reliable support from anybody;

3. It supports Web-based Applications only;

With this detailed information of the Selenium WebDriver, one can decide the type of relationship required for their project or idea. I am sure that even you must have decided for yourself by now.

Let me know the same in the comments section below!

4 thoughts on “A Basic Understanding Of Selenium WebDriver Architecture”