Be it commuting to the workplace or; ordering your favorite food right at your doorstep or; booking affordable accommodations for your planned trips or; making a free video call to your near and dear ones or; any other online service, people can be seen tapping or swiping away on the big screens of their smartphones every now and then. Below pie chart can help in providing grounds of facts to the mentioned statement: 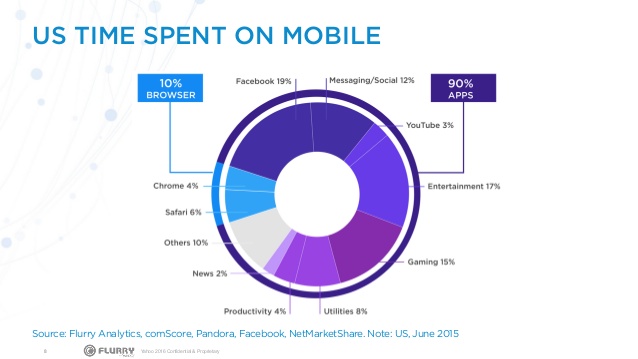 As per the latest data from Yahoo’s Flurry analytics, it can be clearly seen that 90% of consumer’s time is spent on the usage of mobile apps.

One more found database from eMarketer will be able to throw more light on this highly rated trend. This data revealed that the number of smartphones users have grown immensely by 2016. 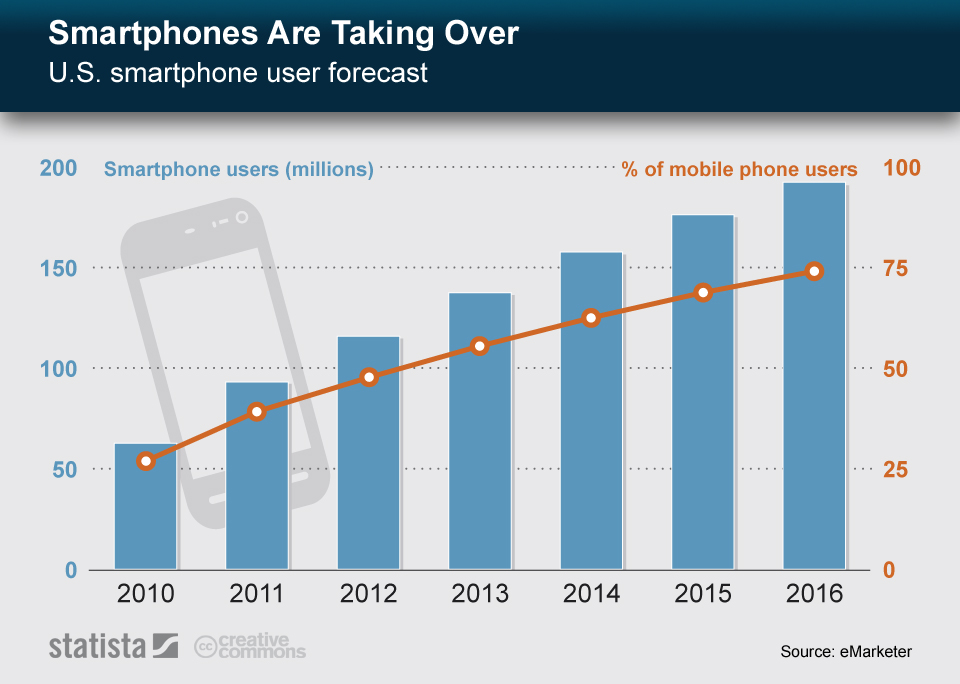 As per these statistics, it can be undoubtedly concluded that mobile or rather ‘smartphones’ holds the key to the bright future of the business industry. These are currently serving as a great platform for businesses to expand the reach of their products and services in the consumer’s domain and they are sure to continue so in an immense manner in the upcoming years.

Nowadays, mobile application has become as one of the primary options for widening the reach of communication within consumers. Gone are the days, when people were dependent on advertisements and word of mouth. The new era is a highly digital one equipped with the knowledgeable usage of smartphones. Taking this line of thought towards the progressive path, it can be stated that in this wide world of active smartphone users, there has to be an open door for the development of best and needful mobile apps.

If you are a mobile developer, then you must be knowing that the above-mentioned points are just few of the add-on incentives that go as a serving label along with the developed mobile apps. However, the idea of Mobile App Development is something bigger and tremendous in size. Tempting users towards the click on “install” button and gaining top ratings for a long term after its installation depends on the proper follow up of many critical factors. With such necessities and demands, there is a need for the follow up of certain practices that can eventually lead to the development of best quality mobile applications.

Below is a list of some best practices one must adopt while developing a mobile app:

Lay the Basics as per User Needs

The expectations of people using the application matter the most while developing a mobile app. Who is going to use the application (target audience) and how they are going to use it (needs or requirements of the target audience) needs to be considered at the early stages of the mobile app development. It is actually important and beneficial to solve such queries before moving further.

This can help in ensuring the fact that the app’s design is aligned as per the user’s needs and demands. This will further lay out the basic strategy during all stages of app development process. Feeding users with what they want will definitely take the app’s usability at high index, thus benefiting both user and the development company.

Big things come in small packets. In 2010, Uber emerged as the first mobile app to solve the local problem of not getting taxi easily in San Francisco. They were the first to understand and work on the need of the small market. They focused on the local market, developed a mobile application as per the associated business model and then expanded their reach to the global market.

Now, Uber is available in over 70 cities across the world! This outcome was expected and required pre-planned measures were taken to achieve this rate of desired success.

Choosing on to the Operating System

According to the usage tracked down by Millennial Media ad network, clearly states that Android has grown as the demanding platform for most of the mobile users. 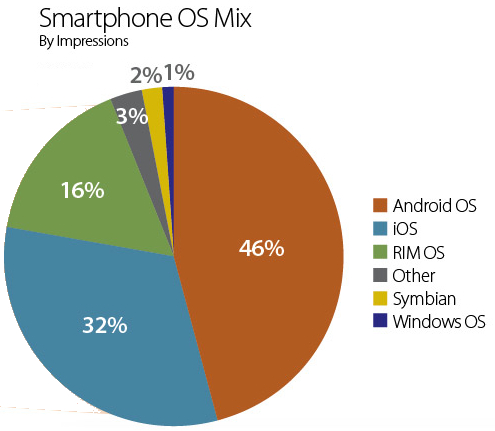 Sweeping away the red carpet of mobile app development platform by 46% Android stands out above all. iOS bagging the second position by 32%, RIM OS by 16%, Symbian by 2%, Windows OS by 1% and others by 3% stand after Android.

Comprehensibility of the App

Making the app difficult and challenging to use will do no good to the user. It will however, take away the interest of user thus, leading to the complete failure of your designed app. It is hence advised to design easy to use applications for the users.

An easy to operate application will make the user generate and maintain his interest in your app and it will help in exploring more about the application. Providing clear instructions for the users wherever necessary and including texts to accompany the graphics used in the app can help in easing out the app’s usage to the users.

It is however advised not to fall for the common mistake of only relying on images or graphics as it might not serve the real purpose of the app. Hence, maintain a proper balance of text and images while designing the app structure.

Making use of Social Sharing Platforms

Mobile applications need to have the installation of plug ins of social platforms to ensure its smooth advertising. Enabling the users with sharing their purchases, gaming scores, some interesting content, feedback and much more over the popular social networks can serve the organization’s purpose of spreading a word about their designed app.
Social platforms including Facebook, Instagram and Twitter can be easily integrated into the app during the stages of its development so that these can further serve as the unofficial endorsers of your application. This will help in generating an awareness about your application without actually putting in many efforts.

Functionality and Uniqueness of the App

Users do not like the boring mundane experience in an app, rather they love the pretty pictures, blinking lights and something new in the app. So, it is essential to consider such factors while it’s designing.

Apart from this, another thing which matters the most for a user is the functionality of an app. Building on to the core of app and ensuring its smooth processing is the utmost priority of a developer. Ensuring that the backend database interface is locked down and the results returning to the app are displaying in correct manner makes your app serve in the long run.

Security of an App

Mobile devices are vulnerable to multiple threats due to their exposure to the upload and download of wireless data. This may further lead to the arrival of risky viruses or some potentially insecure data in your mobile, thus leading to its further damage.

Taking such considerations in mind before going for the app development can make you and your app sound secure. All the apps involve the use of some private information which is personal to the user as well as to the app owner. This piece of information must be kept sacred while developing a mobile app.

Also, tools like encryption to protect sensitive data, wiping away the data from the lost device and generating an automatic back up mechanism need to be incorporated as inherent securities while developing an app.

Having a strong and powerful backend for the development of mobile apps is a must for every developer. A known one named MBaaS (Mobile Backend as a Service) serves as an integral option for user management, data storage, push notifications, social network integration, secure connectivity and analytics data.

Options including pricing, features involved, time to market and availability of both cloud and on-premise MbaaS must be considered well before laying down the designing structure of an app. This will not only help in the later stages of app development but will also help in portraying a clear picture of the app’s structure.

With the incorporation of application analytics feature in an app, it becomes easy to interact with the user. The mobile environment of a user is not connected always hence, it becomes difficult to monitor about the other usage analytics and clicks.

The involvement of analytics feature helps with the easy identification of features worked or which didn’t by the users. This will further make you aware about whether the users are actually interacting with the app the way you expected or not.

Including feature like crash logs in the app is highly advised as this will alert you about the wrong doings with your app when it is launched in the real user world.

It is essential to provide a proper feedback mechanism to the users. This will lead to the introduction of earnest user experience as users will be allowed to post their feedback in the form of appreciation or complaints freely.

This process allows users to report bugs or crashes and also offers a perceptiveness of what they like and dislike in the app. Benefiting the app development organization, it will help in bringing down the number of technical support issues and will give a thought of line for future app updates. Also, this feature may make you help in identifying about what users expect and demands in your application.

Loyalty must be Paid Well

Gaining loyal and true consumers is a tough thing to achieve and in case, you are able to do then maintaining them is another difficulty level one has to go through. After crossing these levels with flying colors, one is able to make and sustain their loyal consumers. However, this loyalty must be appreciated or paid off well to attract more and more consumers to your app.

Rewarding the users with reward points and surprises will make your user go wow about your app and this will further help in spreading the positive word of appreciation about the application among the non-users group.

Organizing a proper testing session of your application before its actual release will save you from further destruction. There are various tools for testing a mobile app, which is critical for its final optimal performance upon release. Testing for various connectivity options and across diverse devices, ensuring the security, performance and other compliance factors of the application serve as the ground basis for testing an application.

It is generally advised to ensure the smooth functioning of an app before its releasing date, however, this quality check must be performed at every stage of its development to avoid any kind of issue at any stage. In case, you come across any problem, then fix it up and perform a re-test of the application.

Based on user’s feedback and analytics tools, a mobile app may require certain changes or updates even after its release. This update stage will help in fixing up the bugs and improving its performance. If you are working on user’s demands and feedbacks, then you are sure to achieve success and high ratings for your app.

The Google Play Store is enrolled with a checklist for the upgradations of the app; however, the App Store requires the approval of new binary before its final release.

Considering and taking proper steps towards the follow-up of above-listed steps can turn your IT business into an expertise domain. By providing and ensuring the application of such tips and services, one can make a deeper connection with the consumers, which will eventually serve positive aspects for your organization in the long run.