In this article, we will learn how to use Kendo UI with Angular 2.  Before we directly jump to the topic, let’s understand what is Kendo UI and what are the various features of this technology? So, let’s get started…

WHAT IS KENDO UI?

Kendo UI is basically javascript based client side UI framework. It is one of the best available jquery based toolkit available with full angular iteration.

There are two types of versions available for Kendo UI, which are listed and explained below:

This version is open source from teleric. You don’t need to pay anything for it. This version comes with only 24 widgets available in Core and complete mobile.

This version is a paid version and it comes with complete web widgets, complete mobile widgets and data visualization.

Kendo UI provides built-in JavaScript templating engine with Kendo UI toolkit. Templates are automatically merged with JavaScript data at runtime. So it is easy to use and high performance. 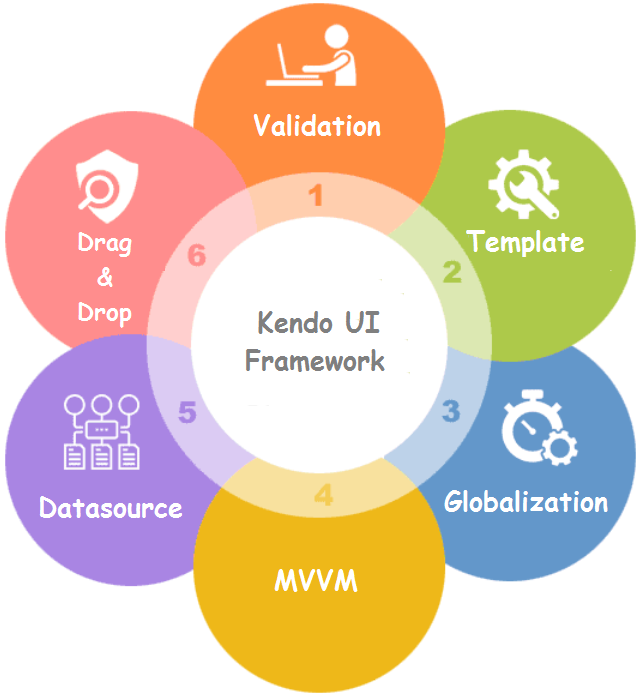 Kendo supports globalized scripts you can set locale using script line such as kendo.locaization and all the kendo controls will render its value according to locale

Kendo gives you the feature of two-way binding like angular do. The View is automatically updated once the model value is changed. To achieve two-way binding there is an attribute called “rebind” we just need to decorate the input control with “rebind” attribute.

Kendo provides pre built drag and drops UI features. that can be easily used by just including certain libraries of Kendo.

Kendo UI supports CSS3, HTML5, Javascript, Jquery as well as AngularJS both 1 and Angular JS 2. But in this article, I am going to show how we can implement kendo grid for Angular 2-

Please follow the steps give below to achieve the goal:

Step 2: Install Node.js(https://nodejs.org/en/download/) in your machine if it is not there.

Once you are done with the installation run node js command prompt.

You will get below message once you are logged in successful

Step 4: Verify if the code works or not, by passing the following command. “npm view @progress/kendo-angular-grid versions “ The output should be as shown below.

Once you hit the given command it will take some time to install the packages and once the installation is complete you will see the messages shown in below image.

Note: You will get some warnings. You can ignore them.

Step 6: Create a new project using the following command “ng new KendoAngular –style=scss ”. You will see the below message if the installation is completed successfully.

Note- Here KendoAngular is the project name, you can write any name according to the project.

It will take some time to install its dependencies and packages.

Note: Here in the above command I am installing the Kendo grid component but you can install any UI component as per your requirement.

Step 9: Change the module.ts file code with the following in src/app location.

Step 12: Use below-given command to install the theme.

Note: To install the theme run above given command in the root of the project.

Step 13: Use below-given command to add the theme package into your project

Note: Please follow step 15 If you get the following error given below.

Now, pass the ng serve command again. The command prompt will show below messages and run the index page it will show the list of employees with kendo grid.

So in this tutorial, we have learned what is Kendo UI, features of Kendo, how to install Kendo with Angular 2.0, working with Kendo UI components. So far we have learned using Kendo grid component but in my upcoming articles, we will learn using other components as well. Stay connected for more updates…