Hello readers, if u are a JavaScript developer and want to use JavaScript as the backend for your site then give a thought to Node.js!!! Today, we are gonna learn about Node.js and will create some small basic programs like Hello world. But before that let’s have a glimpse of Node.js. 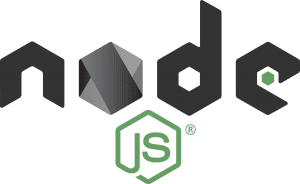 Node.js is a JavaScript runtime built on Chrome’s V8 JavaScript engine. For developers it’s like a miracle which made it possible to use JavaScript as a backend language.

Node.js uses an event-driven and a non-blocking Input/Output model which makes it lightweight and efficient. npm, also called as Node.js’ package ecosystem is the largest ecosystem of open source Node.js libraries in the world.

Node due to its asynchronous event driven JavaScript runtime nature allows us to build scalable network applications. Even in a single “Hello world” example, many connections can be handled concurrently. Upon each connection the callback function is executed, but if there is no work to be done, Node server will sleep.

For Example, here below we have a basic “Hello World” program which creates a basic node server which sends ‘Hello World’ message when its accessed via browser.

You can download node.js from here as per your system OS architecture. After Installing node, we need a good editor so that we can easily write and run our programs in node.js. We are gonna use Visual studio code, but you can choose any editor. Here below I’m providing list and download links of some popular editors:

Now let’s create your first hello world program. Open your editor and create a file named hello.js. Now paste the above shown code in that file and save it. To run the node server, open current directory in command prompt or in Terminal of  Visual studio code and execute it with node.js:

Then the following message will be shown in console:

Similarly, you can run any node.js program. Now let’s learn about this program step by step.
In this example, the first line const http = require(‘http’); is a basic JavaScript declaration. It allows to load http module  of node and  use its methods using http constant.

Third statement from line 6 to 10 is using http.createServer(), which method Returns a new instance of http.Server. In this function a callback function is provided which  takes two parameters, first one denotes request data and second one denotes response data. Here res.statusCode = 200; sets status code for response to be 200 which denotes success. Similarly, res.setHeader(‘Content-Type’, ‘text/plain’); sets response header to be type of text. And res.end(‘Hello World\n’); sends whatever content is to be send as response, this function takes either string or buffer as parameter.

In line 12 server.listen() function is asynchronous function which makes our node server to listen connections from browser. This function takes three parameters in following order:

REPL stands for “Read-Eval-Print-Loop (REPL)”. REPL is virtual environment fro Node or we can refer it as Node Shell. It is a quick and easy way to test simple node.js code. To start REPL simply start Command prompt and type node then press Enter. The screen will appear as below: 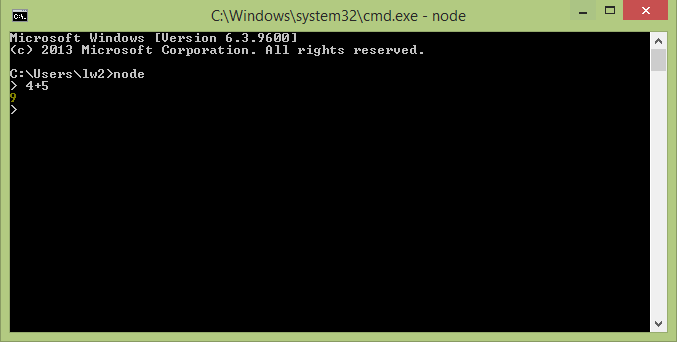 You can now test pretty much any Node.js expression in REPL. For example if you type 4+5 and press enter, then it will print sum of 4+5 which is 9 in next line. The + operator in REPL also concatenates strings as in browser. For example “Hello” + “World” will print “Hello World”.

You can also define constants or variables and then use in REPL as in browser. You can also type multiple line code in REPl, you have to just press Enter key. For example if you write a function to add two numbers then it will be like as shown in below image. 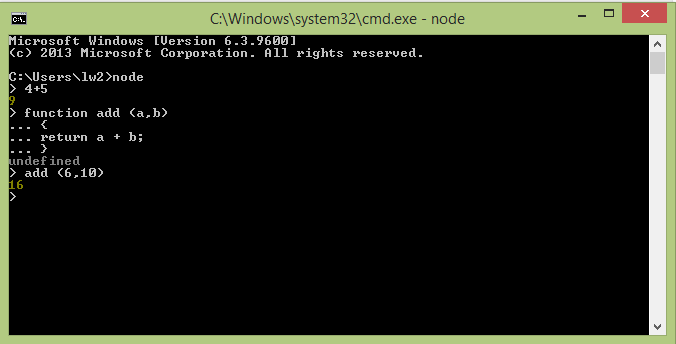 Exit: To exit from the REPL terminal, you need to press Ctrl + C twice or write .exit and then press Enter.

Here I am providing some important REPL commands in below Table.

Node Package Manager (NPM) is a command line tool that installs, updates or uninstalls Node.js packages in your application. It is also an online repository for open-source Node.js packages. The node community around the world creates useful modules and publishes them as packages in this repository. To know about any node.js package or to find any you can visit their official site https://www.npmjs.com.

NPM is already included with Node like REPL. to know which version of NPM is installed you can use following command in commmand prompt.

To update NPM you can use following command:

Similarly to install any node.js package globally in your system use following command: