Today, smart grid, smart homes, smart water networks, intelligent transportation, are infrastructure systems that connect our world more than we ever thought possible and a common vision of such systems is usually associated with one single concept, the internet of things (IoT), where through the use of Wireless Sensor Network  and the entire physical  infrastructure is closely coupled with information and communication technologies; where intelligent monitoring and management can be achieved via the usage of networked embedded devices.

In such a sophisticated dynamic system, devices are interconnected to transmit useful measurement information and control instructions via distributed sensor networks.

What Is Wireless Sensor Network?

Wireless Sensor Networks (WSNs) are becoming increasingly important with the increase in their deployments Until recently. Sensor nodes were only collecting the data with limited if any processing going on at the node level.

Therefore with increases in the sensor node’s processing abilities, it is now possible to make sensor networks intelligent at the node-level, as well as at the network-level as opposed to just the base-station-level so as to enhance their sensing capabilities.

Our approach embeds the intelligence aQ in the node thereby enabling individual nodes to collaborate and co-operate in making locally intelligent decisions. This is a significant advancement from current approaches and is the main novelty of our proposed work. In this work, we developed a new evolutionary computing
paradigm GP SENSE that works within a sensor network. We demonstrate the paradigm by implementing Genetic
Programming (GP) for Sensor Networks.

Such a GP system can help develop several applications including intelligent-sensing, resource optimized communication strategies, intelligent routing protocol design, and novelty detection at node level.. Developing such a system is not trivial. It is challenging because of following constraints on sensor nodes (called motes):

To effectively handle these constraints, many enhancements need to be done including:

Seems like reducing the space requirements (footprint) of the evolutionary computation algorithm, develop effective data representation schema to handle the inputs and outputs of the algorithm, and significantly tighten the run-time memory requirements of the overall technique.

In terms of test problems, we decided to initially focus on symbolic regression to learn the relationship between specified sensory attributes at the node level. We choose this problem
since it is well known as a fact that various sensory attributes in a sensor node obey certain relationships depending upon the process under inspection.

Because in telecommunications and computer science, wireless sensor networks are an active research area with various workshops and meetings organized every year, for example, IPSN (Information Processing in Sensor Networks) and EWSN (European Conference on Wireless Sensor Networks) etc. 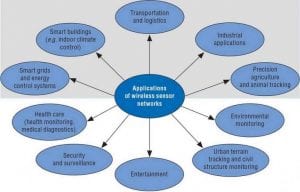 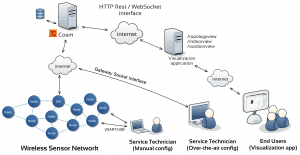 Wireless technology offers a few points of interest for the individuals who can construct wired and remote frameworks. It exploits the best innovation for the application. To do this, you need a flexible software architecture like the NI Lab VIEW graphical system design platform. Lab VIEW offers the adaptability expected to interface an extensive variety of wired and remote gadgets.

There are three types of network topologies:

Star topology, each node connects directly to a gateway.

And finally, to offer increased reliability, mesh networks feature nodes that can connect to multiple nodes in the system and pass data through the most reliable path available.

This mesh link is often referred to as a router. 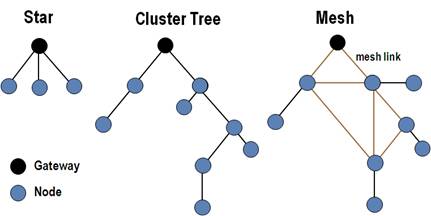 Often three years of battery life is a requirement, due to its low-power consumption so many of the WSN systems today are on ZigBee. Because battery life and power management technology are constantly evolving. Because of the available IEEE 802.11 bandwidth, Wi-Fi is an interesting technology.

The second technology consideration for WSN systems is the battery because, in addition to long life requirements, you must consider the size and weight of batteries as well as international standards for shipping batteries and battery availability. The low cost and wide availability of carbon-zinc and alkaline batteries make them a common choice.

To extend battery life, a WSN node periodically wakes up and transmits data by powering on the radio and then powering it back off to conserve energy. WSN radio technology must efficiently transmit a signal. It allows the system to go back to sleep with minimal power use. This means the processor involved must also be able to wake, power up, and also return to sleep mode efficiently.

6 thoughts on “The Use of Wireless Sensor Network in Internet Marketing?”